MY MERCEDES IS BIGGER THAN YOURS by Nkem Nwankwo 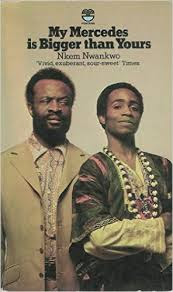 This book just goes to show that merit is not always rewarded.  A quirky, funny, sad story of 1970s Nigeria, it’s a very good book, and sadly seems to have been rather forgotten.  Or at least the internet doesn’t remember much about it, and if the internet doesn’t remember you, who does?  The copy I have is an old library book, which I see was only checked out three times in nine years.  I always find an underused library book oddly tragic.

MY MERCEDES IS BIGGER THAN YOURS is about a man and his car.  Here we are on page one:

Once upon a time a young man was savouring the pleasures of a new car.  He was thinking that there were really occasions when a car seemed to drive itself as it were, seemed to respond to some remote stimulus independent of the driver.  It had its moments of cursedness, of course, when it whined and snorted for no particular reason, then there were moments of heavenly smoothness when it floated on the crest of some intangible wave . . . It was like when you have gone into a woman.  Some of the time is taken up with clumsy flopping about; trying futilely to find the perfect position and rhythm.  Then there are moments of complete synchronization of limbs which seem to come about without effort.

And enjoy this snippet, which shows us that 1970s Nigeria was not so different from today:

It was going to be one of those mad, mad Mondays in Lagos, when motor traffic was snarled up all over the town in hot, murky despairing stretches.  The people who owned cars all observed the ritual of the beginning of the week with religious fervour.  On Monday, after the weekend interruption, they resumed the grim scramble for crusts that feel off the tables of the great of the earth.

He takes the car back to his rural home, and there gets into an accident, losing the car and beginning a profound downward spiral.  I particularly enjoy this observation:

For instead of continuing to function and perhaps getting the better of time and circumstances, he simply allowed them to take the initiative and suppress him.  In life as in sports the important thing is not to win but to go on performing.

In his search for a way out he veers wildly from politics to religion:

(Christianity) offered the negative values of self-denial and humility.  These values were contrary to his concept of himself.  And they were certainly not of much use to his people.  Self-denial was not much of an achievement, if you were born in circumstances under which it was inescapable. . . . An attitude of stoicism was possibly the best response to such a hard life but it would be cruel to try to make what was obviously a heavy burden appear like a virtue. . . . But if intellectually he had drawn away from Christianity, emotionally he was attracted back.  Especially during his period of despair.  Christianity was invented by underdogs for underdogs.  And Onuma had become one of the deprived of the earth.

I won’t give away the end - which involves his acquisition of another car, but not of the happiness he hoped for - on the very slim chance you come across this book. It's really has all the makings of an African classic, and I'm not sure why it's not better known.
- November 29, 2017