A THOUSAND ACRES by Jane Smiley 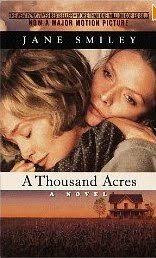 Feast your eyes on this abomination of a cover.  Truly, publishers have utter contempt for women.  I can only hope that this is not based on cold hard analysis of what women actually buy, though I fear it may be.  But my god, it won the PULITZER and they make it look like something out of Hallmark.

You have to have sympathy for women buying it hoping for Hallmark, because it is in fact a hair-raising story of child abuse and revenge, wrapped in a sort of retelling of the Lear story.

A THOUSAND ACRES is set on a farm in Iowa, and tells about the father of three women signing over his farm to them as his health fails.  He is a terrible old tyrant, and gets worse as he gets sicker, changing his mind about the farm and making their lives miserable.  They decide not to give in to him, as they recognise how he has hurt them over the years.  The sisters manage to keep the farm from him, but lose everything else in the process, including their marriages, the respect of their community, their relationship with each other, and eventually even the farm itself, which goes to that eternal winner, the bank.  There is however something really triumphant in the bitterness with which they fight.  Here is the middle sister, Rose, dying of cancer at 37 from her hospital bed:

"I have no accomplishments.  I didn't teach long enough to know what I was doing.  I didn't make a good life with Pete.  I didn't shepherd my daughters into adulthood.  I didn't win Jess Clark.  I didn't work the farm successfully.  I was as much of a nothing as Mommy or Grandma Edith.  I didn't even get Daddy to know what he had done, or what it meant.  People around town talk about how I wrecked it all.  Three generations on the same farm, great land, Daddy a marvellous farmer, and a saint to boot." She used my hand to pull herself up in the bed.  "So all I have is the knowledge that I saw!  That I saw without being afraid and without turning away, and that I didn't forgive the unforgivable.  Forgiveness is a reflex for when you can't stand what you know.  I resisted that reflex.  That's my sole, solitary, lonely accomplishment."

Rose in many ways fights the hardest to build a new life on the farm.  Her sister visits her home after her death:


The living room, I realized, hurt me the most, because that was where Rose made her last stand . . .

I loved this evocation of the grandeur of the domestic struggle. Indeed, this book is beautifully written throughout - here Smiley is, even finding romance in a Perkins, which I would have thought impossible.  It's  the oldest sister describing the relief she feels when she gives up a life on the land for a life in the town:


I liked the same thing about that as about working my waitressing job at Perkins, where you could get breakfast, the food of hope and things to be done, any time.  There was nothing time-bound, and little that was seasonal about the highway or the restaurant.  Even in Minnesota, where the winter was a big topic of conversation and a permanent occasion for people's heroic self-regard, it was only winter on the highway a few hours of the year.  The rest of the time, traffic kept moving.  Snow and rain were reduced to scenery nearly as much as any other kind of weather, something to look out the window at but nothing that hindered you.