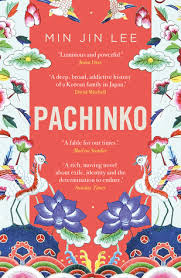 I had actually forgotten I read another book by this author, FREE FOOD FOR MILLIONAIRES.  which is a good thing, because had I remembered I would certainly have avoided PACHINKO.  This would have been a pity, as it is a much better book.  It tells the story of multiple generations of Koreans who live in Japan and is an interesting set of human stories mixed up with a history lesson.

It starts in the early 1900s, with a fantastic set of first lines:


History has failed us, but no matter.
At the turn of the century, an aging fisherman and his wife decided to take in lodgers for extra money . . .

From their unspools a long and complicated family saga.  The Japanese do not come out of it very well; I guess this is not surprising; Japan is not famed for the welcome it gives immigrants.  Even into the 1980s, after multiple generations born in Japan, the Koreans still can't even get Japanese passports.

Beyond your classic immigrant and poverty problems, the characters also need to navigate what appears to us now an extraordinarily harsh set of moral structures.  For example, a forty year old man finds out his mother was not married when she got pregnant with him.  So he has the obvious response: he kills himself.  Yup.  He's not alone.  People kill themselves left and right in this novel, apparently over basically nothing, and everyone else seems to find this pretty normal.

Also of interest is the ongoing debate about moving back to the Koreas, once they are created, with some characters wanting to move back to South Korea, but most deciding in the end for the new Communist utopia in the North.    It's an interesting example of the road that definitely should not have been taken, and about how your parents bad decisions become your own