THE POWER by Naomi Alderman 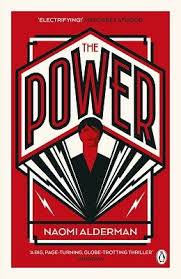 The book had a great premise, but not so much with the plot.  However, the premise was great, so let's talk about that.  THE POWER imagines a world where women gradually acquire the ability to generate powerful electrical shocks from their own bodies.  Female readers, let me tell you, it is fun to see how the worm turns.  In some countries, like Saudi Arabia, it results in a revolution.  In Moldova, sex traffickers get what is coming to them.  I particularly enjoyed the parts where changes were less dramatic; one of the central male characters recounts with horror how frightening it has become to walk down an ordinary dark suburban street.  Welcome to our world, gents.

As women become more powerful they of course begin to abuse their power.  I was surprised how random and brutal it seemed when they force men to stay home (they are described as 'dead-eyed') though that is common in many cultures today for women.  There is also a horrible rape scene, which reminded me how rarely one reads about that kind of violence against men.  Thrillers are usually full of tortured and dead young women, so this was a fun (?) inversion too.

The book tries to resolve by having a global war.  Let's ignore that.  The fun is the premise, which worryingly, for me, read a bit like wish-fulfilment.  I guess everyone wants to be on the winning side.
- December 17, 2017