CONVERSATIONS WITH FRIENDS by Sally Rooney 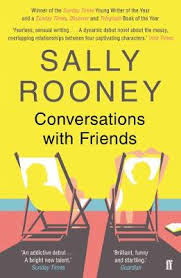 I can't think that I have ever liked a book so much that immediately after finishing it I started it again.  Enter CONVERSATIONS WITH FRIENDS.

I read it twice last week, back-to-back.  The second time I wasn't exactly reading it, so much as examining it, trying to figure out how it worked.  On paper it doesn't sound like the sort of book I would like: it's about a 21 year old woman, Frances, who is in an intense but poorly defined relationship with another woman, as well as having an affair with a 32 year man who is likewise is]n an undefined relationship that involves him being married.

Sounds dreadful, doesn't it?  It feels like one of those narratives where everyone is annoyingly at the mercy of their feelings and it is clear  that the intention is to challenge the reader to learn to be less bourgeois.  And yet somehow it's actually a really appealing set of love stories with no (alright, minimal) lecturing, from which everyone emerges somewhat improved.

I've concluded that a large part of the appeal is the sparkling contemporary dialogue, particularly some of the best use of IM and email I've ever read.  I've actually only just noticed while writing this sentence that the title of the novel is CONVERSATIONS WITH FRIENDS, suggesting that Rooney may know what she is doing.  Here is a fun sample of a conversation between Frances and her 'girlfriend':


So how bad is this crush, from one to ten?  she said.  Ten being the kind of crush you had on me in school.
And one being a really serious crush?
She laughed, even though her mouth was full of cereal bar.
Whatever, she said. Is it like, you have fun talking to him online, or like, you want to tear him open and drink his blood?

There's something very acutely observed about the way Rooney looks at modern relationships.  Here for example Frances is having bad sex on a Tinder date:


I let myself become rigid and silent, waiting for Rossa to notice my rigidity and stop what he was doing, but he didn't.  I considered asking him to stop, but the idea that he might ignore me felt more serious than the situation needed to be.  Don't get yourself into a big legal thing, I thought.  I lay there and let him continue.

There is also a lot of fun in the recreation of the world of the very young adult.  This may be in part because Rooney is -  brace yourself - just 26 years old herself.  Here is Frances on her plans for the future:


I hadn't been kidding with Philip about not wanting a job.  I didn't want one.  I had no plans as to my future financial sustainability: I never wanted to earn money for doing anything.  . . . Though I knew I would eventually have to enter full-time employment, I certainly never fantasized about a radiant future where I was paid to perform an economic role.  Sometimes this felt like a failure to take an interest in my own life, which depressed me.  On the other hand, I felt that my disinterest in wealth was ideologically healthy.

There are a few false notes - British writers like 'self-harm' as a narrative device almost as much, and use it almost as cynically, as they do 'child abuse' - but other than these few caveats, I would whole heartedly recommend it.  I'm still turning it over in my mind, trying to figure out what is about it that is so wonderful.
- April 02, 2018 No comments: Links to this post