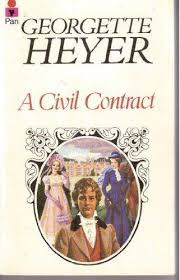 Yes, the Heyer kick is still ongoing. And this is still the books bought in a dusty second hand store on a rain day.

Heyer here tries to veer from her standard plot outline, with unhappy results.  This one is a story about a couple who marry for convenience (one for money, one for a title), and end up in love anyway.  Sounds unlikely as a plot, and indeed it doesn't really work.  However, who cares: it has narrative drive and fun, which is what you really want anyway.
- October 27, 2018 3 comments: Links to this post

WAR WITH THE NEWTS by Karel Capek 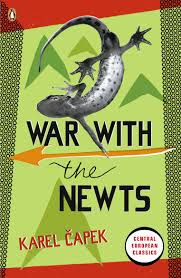 It's always a gamble to try a 1930s sci fi.  Especially when it is in addition a satire on global politics.  And especially when the author is mostly famous for a another book  (Actually a play, RUR, which gave us the word robot).  The heavy emphasis on lizards is also not a good sign.

This was a gamble that paid off.  WAR WITH THE NEWTS is a very strange, very contemporary book, that is made up of bits and pieces of news reports, scientific studies, and ordinary narrative.  It begins with the discovery of some large undersea lizards, whose population is kept small by shark attacks.  A crusty old sea captain discovers they are teachable, and once they have knives, the shark problem is very much handled and their population explodes.  Humans find lots of uses for the newts, especially in construction and manufacturing.

Being humans, we also of course conduct terrible experiments on them, or try to educate them, or get them to cover their genitals.  Slowly it becomes clear to everyone that the newts are building up armaments under water, but the countries can't agree to do anything about it, as they are all solving for short term self-interest rather than long term human survival.  It doesn't end well.

I find it interesting that Capek wrote it as a satire in the lead up to the Second World War, because it is depressingly relevant to the following current problems: imperialism, Trump, climate change.  Especially climate change.  I guess we don't change so much.
- October 27, 2018 1 comment: Links to this post

THE KINGDOM by Emmanuel Carrere 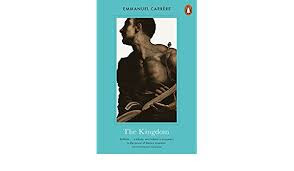 On the back of this book, one of its critics describes it as: "Lives of the Saints retold by Karl Ove Knausgaard." My initial thought was: what?

Yes, it's a strange one.  Carrere tells you a lot about his life.  Not just the mundane (as per the above: "Saying that evenings are quiet in a mountain village in the Valais region is an understatement, and I dedicate some - in fact almost all - of them to watching pornography on the Internet."); but also the wonderful - in his brief but intense period of Christian belief, which took him by really quite unwelcome surprise.  However what I most enjoyed I think was learning about the early days of Christianity.  Really, it is quite incredible, that an idea that took off among a bunch of impoverished fishermen so quickly took over the Roman world.  I've often found that really strange, and it is interesting to see how it happened.

For example, he tells us about one of the first pagan sources on the Christians, a letter from Pliny the Younger, who had become governor of some region:

Pliny discovers that the civic religion is in decline, the temples are empty, no one at the marketplace wants to buy meat that's been sacrificed to the gods, and from what he's gathered, the principal reason for this . . . is the success of a sect he's never heard of before: the disciples of Christus.  They get to together in secret.  Pliny's chief of staff thinks it's to have group sex.  . . . (Pliny) makes inquiries, sends someone, and the results of his investigations are disconcerting.  When they get together, these people limit themselves to sharing a frugal meal, smiling, and singing hymns.  So much mildness is worrying.  Pliny would have preferred debauchery, but he has to face the facts: no one's sleeping with anyone.


It's amazing, really.  The power of ideas to change the world is something really remarkable.

I also learnt a lot about other philosophies in competition with Christianity at that time.  Enjoy this as a last snippet, which should make you think twice about our own capitalist world:

Whether Epicureans or Stoics, all the wise men taught that fortune is changing, unpredictable, and that we must be ready to lose all we have without a murmur.  None of them, however, would have recommended or even entertained the idea of getting rid of it on purpose.  They all considered what they called otium - that is, leisure and the free use of one's time - to be an absolute condition of human accomplishment.  Seneca, one of Paul's most famous contemporaries, says something quite nice on that topic: if by some mischance he were reduced to working for a living, no big deal; he'd just kill himself.

After reading this book, I realised I've read another book by this same author: THE ADVERSARY.  Memoir? History?  No, it's a straightforward piece of true crime.  This author is truly kooky. It gives me hope for the world of publishing.
- October 07, 2018 1 comment: Links to this post