THE RETURN OF THE SOLDIER by Rebecca West 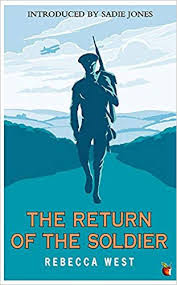 In this novel a man returns from the first World War unable to remember the last fifteen years of his life, which includes his wife.  It feels like the set up to a romantic comedy.  Oh guys: it is not.

Chris is 35, and the last thing he remembers is being 20, and madly in love with a working class woman.  He tries to be polite to this stranger his wife, and to pretend to like the 'improvements' he himself made to his family home.  He also insists on seeing his old girlfriend.  Things have not gone well for her:

She was repulsively furred with neglect and poverty, as even a good glove that has dropped behind a bed in a hotel and has lain undisturbed for a day or two is repulsive when the chambermaid retrieves it from the dust and fluff.

We learn that they were only separated by a misunderstanding, and it becomes clear that he would have been much happier with her than the woman he actually married.  Without his memory, he is overall a much happier man; he has the woman he loves, and he does not remember the war at all.   Then comes the really tough question of whether it is even right that they help him remember - whether they stealing from him fifteen years; or giving him the gift of the life he should have had.


I won't tell you what they choose; it's a good question for us to think about though.  On my side, if it ever happens to me, please don't hesitate: I'm happy to miss the First World War and the marriage mistake, even if it means missing out on my adulthood.  That has been a dubious delight in any case.
Let's take a moment to give a shout out for west, who was just 24 when she wrote this novel, and sounds a real character.  Enjoy this, on feminism:


I myself have never been able to find out what feminism is; I only know that people call me a feminist whenever I express sentiment that differentiate me from a doormat or a prostitute

MY SISTER, THE SERIAL KILLER by Oyinkan Braithwaite 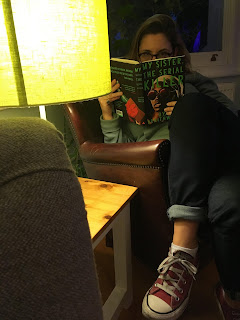 I've never read a novel told from the perspective of the accomplice before, and it was weirdly compelling.  For Korede, that her sister is a serial killer is buried in a complicated mass of other feelings.  I can kind of believe it: how can the fact of some recent and anonymous killings compare to the complex mass of sibling rivalries?  It's not even a contest.  Thus Korede spends much more time worrying about her how much prettier her sister is than how about much more homicidal she is.

Korede is the older child and the good one.  Here’s what’s in her handbag:


One first aid kit, one packet of wipes, one wallet, one tube of hand cream, one lip balm, one phone, one tampon, one rape whistle.  Basically, the essentials for every woman.

That's a high bar: I only own one of these things.

Her younger sister is wild, and pretty, and very dangerous to men.   It all gets personal for Korede when the man she has a crush on falls for her sister, putting him in imminent danger.

It’s a fun, twisty killer, and remarkably enough is marketed as such.  That it is advertised as a genre novel is I think a testament to its quality.  I say this because it is set in contemporary Lagos, so it ran a very serious risk of being consigned to the world literature shelf.  This is the death knell.  So well done Oyinkan Braithwaite!

TRAVELS WITH MY AUNT by Graham Greene 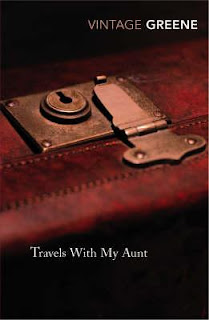 TRAVELS WITH MY AUNT is a rollicking comedy about realizing you have wasted your life.

It’s as if Greene somehow put his writing through some kind of lens to find the funny side of his classic themes: guilt, secrets, Catholicism, Sierra Leone, sexual hangups. They’ all there, but somehow hilarious.

I found it quite disorienting.  Counting back over the blog I seem to have read a lot of Greene (7! THE END OF THE AFFAIR, THE HEART OF THE MATTER, OUR MAN IN HAVANA, BRIGHTON ROCK, A SORT OF LIFE, WAYS OF ESCAPE, THE QUIET AMERICAN) and it was strange to see the other side of his typical neurotic style.  Here for example he is having fun with funerals:

People are generally seen on their best on these occasions, serious and sober, and optimistic on the subject of personal immortality.

I am not sure I will ever be able to go to a funeral again without laughing about that last phrase.

TRAVELS WITH MY AUNT is about a man who has lived a safe suburban life as a bank manager.  His disreputable elderly aunt appears in his life, and she whisks him away on a wild series of journeys.  Much of the joy in the novel is in the character of the aunt. Here, for example, she gives her reason for choosing a particular hotel by a bus station: “I like to be at the centre of all the devilry, with the buses going off to all those places.”
Or here she is on saving money:

. . I am not interested in economy.  . . I am over seventy-five, so that is unlikely I will live longer than another twenty-five years.  . . . I made many economies in my youth and they were fairly painless because the young do not particularly care for luxury.  . . They have little idea of real pleasure: even their love-making is apt to be hurried and incomplete.  Luckily in middle age pleasure begins, pleasure in love, in wine, in food

Or, when he shows her his prize dahlias in his garden, she comments only:  “I have always preferred cut flowers”  I find this most hilarious of all, though I can’t say why.

In any case, the aunt has had lots of love affairs (some of them for money) and involves him all sorts of crime and drama, which is he thoroughly enjoys, though it takes some adjustment.  Here he is at a strip club on his first journey with her: I wondered what all the men here did for a living.  It seemed extraordinary that one could watch such a scene during banking hours.

It is fun to see the banker change his life, but it is also, this being Greene, rather sad.  This is in small ways – for example he notes a thin dog following him and comments: I suppose to that dog any stranger represented hope.   God Graham!  You are trying to write a COMIC NOVEL. Or worse yet, here he is on Christmas:  Christmas, it seems to me, is a necessary festival; we require a season when we can regret all the flaws in our human relationships: it is the feast of failure, sad but consoling

Mostly the sadness comes from he dark shadow of the life it becomes clear he has wasted on following rules and doing what other people think he should.  It’s a lesson that you can’t learn too often. 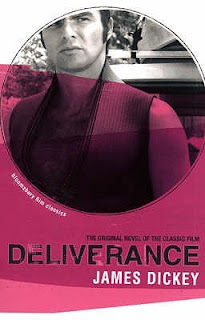 DELIVERANCE is about how horribly wrong camping can go.  It tells the story of four suburban businessmen whose weekend canoe-ing in the country goes life-changingly bad.

Their friend Lewis convinces them all to go on a white water rafting trip, despite the fact that they don't hardly even know how to paddle a canoe.  Even before they get on the water, things don't look good.  They met a feeble old man, and the narrator reflects:

There is always something wrong with people in the country, I thought.  In the comparatively few times I had ever been in the rural South I had been struck by the number of missing fingers. Offhand, I had counted around twenty, at least. There had also been several people with some form of crippling or twisting illness, and some blind or one-eyed. No adequate medical treatment maybe. But there was something else. You’d think that farming was a healthy life, with fresh air and fresh food and plenty of exercise, but I never saw a farmer who didn’t have something wrong with him, and most of the time obviously wrong.The catching of an arm in a tractor park somewhere off in the middle of a field where nothing happened but that the sun blazed back more fiercely down the open mouth of one’s screams.

He is right to be concerned.  I won't give too much away, but SPOILER ALERT suffice to say that someone gets anally raped.  Or 'corn holed,' as the author calls it.  It's curiously dated; because the victim is male, there is a strong subtext that he ought to be ashamed, which seems very wrong to a contemporary reader.  Also dated, but more hilariously, is the discussion of some old bottles they see in the river:

And this is 1970! Anyway, back to the corn holing.  They kill the rapist and then must flee down through the rapids pursued by his scary hick friend.  One man in particular, our narrator, risks his life to save the others.

At the beginning, Lewis, who works hard to be buff and outdoorsy,  encourages the others to be 'real men'.  (I mean, immediate RED FLAG).  Mostly the other men roll their eyes at this.  As one says:  'I'll take what I've got.  I don't read books and I don't have theories.  What'd be the use?  What you've got is a fantasy life.'  Lewis replies:

'That's all anybody has got. It depends on how strong your fantasy is, and whether you really - really - in your own mind, fit into your own fantasy, whether you measure up to what you've fantasized.'

The book is I guess a twisty scary thriller, but it is also somehow something bigger than that.  I am not quite sure how Dickey manages it, but in the midst of white water and shotguns and rape he manages to make this story about that - about who you are at the most basic level, and how quickly you can go there if you need to.  I recommend it.
- February 10, 2019 No comments: Links to this post