CONVERSATIONS WITH FRIENDS by Sheila Rooney 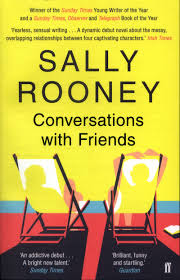 THE CHARTERHOUSE OF PARMA by Stendahl

I keep meaning to read Stendhal.  I got a good distance into this book before I googled myself (by means of this blog) and found out I have in fact already read Stendahl.

And not just Stendahl, but THE CHARTERHOUSE OF PARMA.  In my defense, last time I apparently gave up on p225.  This time I got to p265.

Yes, I'm not into it.  It's just sort of hard going with lots of silly swashbuckling.  This blog is now almost ten years old and I see it is such a long time period that I have forgotten entire books, but not such a long time that I have changed as a person.  Creepily, not just my verdict and quit point are about the same, but so too are the parts I enjoyed.  Both this time and last I noted this rather fun line, which shows cities don't change so very much:


In front of each of these cafes, crowds of the inquisitive are installed on chairs in the middle of the street, eating ice-cream and criticizing the passers-by.

This time around I also enjoyed the first hand account of the battle of Waterloo (as Stendahl marched with Napoleon - including on the way back from Moscow - yikes).  I also really enjoyed learning more about the world pre-democracy, where the 'greatest good for the greatest number' was considered a passing 'cult.'  Here is someone telling the main character, a nobleman called Fabrizio, about a government functionary who greatly respects the nobility:

“But when he is front of the prince, or even in front of me, he can’t say no.  Truth to tell, if I’m to produce my full effect,  I have to have the big yellow sash on over my tunic.  In a frock-coat he’d contradict me, so I always put on a uniform to receive him.  It’s not for us to destroy the prestige of power, the French newspapers are demolishing it quite fast enough.  The obsession with deference is hardly going to survive as long as we do, and you, nephew, will outlive deference.  You will simply be a man!

At one point, Fabrizio considers running away to America, and his aunt (with whom he is in an incestuous relationship, but don't worry about that): "explained to him the cult of the god dollar, and the respect that must be paid to merchants and artisans in the street, who by their votes determine everything."  What a nightmare!

THE BEGINNING OF SPRING by Penelope Fitzgerald 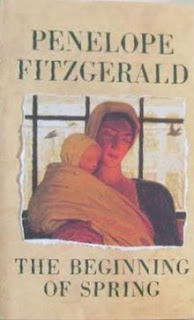 This is the story of a man whose wife leaves him, with the children.  She returns then returns them at the first opportunity.   It is set in Russia in the early twentieth century.

I was stunned by Fitzgerald’s THE BLUE FLOWER, which mysteriously out of a few bits of nothing created a profound meditation on life’s brevity.  This was also a few bits of nothing, but somehow it didn’t quite come together in the same way.  Like THE BLUE FLOWER, those bits of nothing are in their own way remarkable.  Based on the last book, I thought she must be some kind of expert on domestic life in eighteenth century Germany, so specific and detailed was the world.  THE BEGINNING OF SPRING makes me think that in fact she must be an expert on twentieth century Russia.   Really I guess she is just some sort of magician.

ZORBA THE GREEK by Nikos Kazantzakis 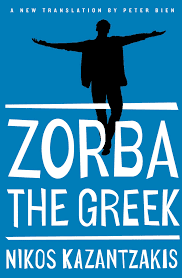 Here is a novel on the exciting subject of dealing with your philosophical problems while also mining lignite in rural Crete.  In my endless quest for something to read I often pick up books in the category of minor modern classic, having finished all the major ones long ago, and usually it’s a good call.  This one: jesus.

Some tortured young man is off to mine lignite.  (What is lignite?  Nobody knows.  But strangely it also came up in this book that I read this year).  He spends a lot of time writing tortured letters to some friend about a set of what we would today call #firstworldproblems about the meaning of life and the nature of Greek identity.  Then he meets this man Zorba, a peasant who tells him all about his love of a musical instrument, the santuri:


If the wife says one word too many, how could I possibly be in the mood to play the santuri?  If your children are hungry and screaming at you, you just try to play ! To play the santuri you have to give everything up to it, d’you understand?

Yes, I understood.  Zorba was the man I had sought so long in vain.  A living heart, a large voracious mouth, a great brute soul, not yet severed from mother earth.

He’s profoundly inspired by Zorba’s connection to the earth and ability to live in the moment.  It’s so classist I can’t tell you.  It’s a really laughable version of the myth of the noble savage that goes completely unexamined.  Or I assume goes unexamined, because I didn’t get to the end. It was just too stupid.  And the misogyny was hard going.  Regular readers know I give a pass to lots of misogyny, because otherwise there’d be hardly anything left to read from the western cannon.  But this one was tough.  You may have noticed how unreasonable Zorba’s wife was to mention the children starving.  He has lots of other strong ideas like this.  Here is how nefarious of us it is to have children when birth control hasn’t been invented yet.

And here’s the part where we enjoy getting raped in war zones.

How they had entered Novo Rossiisk; how tey had looted shops; how they had gone into houses and and carried off the women.  At first the hussies cried and scratched their own faces with their nails and scratched the men, too, but gradually they became tamed, they shut their eyes and yelped with pleasure. They were women, in fact. . .

I just couldn’t do it.  Indeed, if this is a classic it is extremely minor.  Or perhaps it is a major classic, but of a quite different kind than I had been thinking. 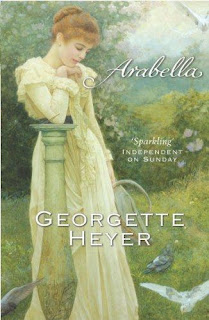 I really enjoyed this one.  It had a kind of standard Heyer plot, though the romantic lead is a bit more of a bad boy than usual; but it struck me as funnier than the others.  Here is an older lady, about who she comments: “Time had done more to enlarge her body than her mind,” and . .. provided she was not expected to put herself out for them, or to do anything disagreeable, she was both kind and generous to her friends."

Or perhas I was just in the mood for Heyer.   Apparently I am on a real kick in 2019, and I blame is all on Bognor Regis.