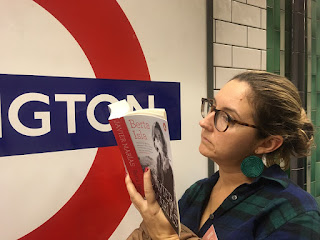 Apparently Marias is an acclaimed Spanish author, and a likely Nobel winner.  All I can say, based on the evidence of this one novel, is that he sure knows how to make a spy story boring.

This lengthy novel is broadly about a woman waiting for husband to return from his forays into espionage.  It might have been interesting as a novella.  I would like it to have been cut by about 90%, including 100% of all gratuitous TS Eliot references.  I did not get to the end of it, and I don't usually blog novels I don't finish, but after the 300+ pages I did get through I guess I have an opinion.

On the cover, The Independent asks: "Sentence by glorious sentence, is there a better novelist alive in Europe now than Javier Marias?"  For me, I guess the answer is yes
- November 24, 2019 No comments: Links to this post

THE BURIED GIANT by Kazuo Ishiguro 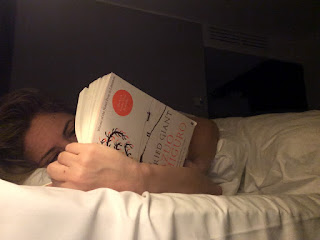 A very odd book about how hard it is to forgive unless you forget.  It also includes dragons.

It's set (sort of) in an imagined Britain after the fall of the Roman empire.  An elderly couple set out on a journey to see a son they have not seen in many years.  The complication is that they can hardly remember him, or much else, as they and everyone they meet is affected by a strange forgetfulness.  There are some other complications too, including elderly knights, pixies, fanatical monks, and so on.

It has that sense of dread that fantasy novels usually have, the idea that 'something' is coming for you.  But the 'something' is not like Gollum, or a cenatur, or whatever; it is the past.  Or more specifically, the memory of the past.  The elderly couple are deeply in love, but there is a terrible sense that if they could remember everything they knew about each other, from a lifetime together, they would not be.

I found it bleak and depressing, despite the faeries and the dragons.  The basic message seemed to be: who would love anyone if they knew it all?   I mean, I am feeling it.  I get it.  This might perhaps be because I read most of it when I couldn't sleep in the very early hours in a hotel room in Luxembourg.  That's really a setting to make you consider what bad choices brought you there.

STORY OF A MARRIAGE by Geir Gulliksen 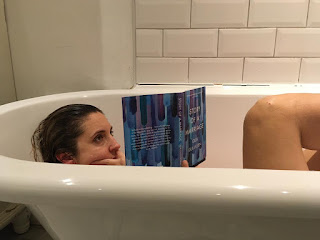 In this novel a man is surprised to find that Pandora's box is full of bad things.

Horrifyingly, it is the story of the author's actual marriage.  It is TMI and yet strangely transfixing.  This guy is the editor of Karl Ove Knausgaard, and like him his novels are based on making his personal life public.  In this case he gives himself the project of trying to imagine his wife's affair from her perspective.  It's a premise both bold and stomach-churning.

This protaganist/author and his wife are both in relationships when they meet, and they leave their partners for each other.  The marry and have children and are pretty happy for ten years.  The husband is kind of titillated by the idea of his wife with other men, and likes to involve her in fantasies about this.  He also tells her their marriage is so strong that he feels she can be free to explore within their relationship.  It is all almost creepily modern, like so much about Scandinavia.  Then the wife starts to spend a lot of time with one of her colleagues at work, and all of this modernity goes straight to the wall, replaced with rage and jealousy.

He does kind of an interesting job trying to imagine what his wife thought, though some of it is very clearly a man imaging what women think.  E.g.: "He was taller than me, she'd noticed that immediately.".  It also has moments of unexpected comedy:


Paul Edvin and I were left to cultivate that male form of human interaction which involved giving each other brief lectures on one thing or another.

But I think this lengthy extract from the end, when its practically over, will best capture what is most eyeball peeling about this book:


I am holding my penis, the thought occurs to her that she is seeing this for the last time, it goes white and then red then white then red again, I pull the foreskin back and forth, slowly at first and then faster, rhythmically, in a movement somehow disconnected from any other in the world.  Soon I'm just a man she has known, one that she lived intimately with, once in an earlier life.  She looks at my hand as it moves . .  in that unique way that resembles nothing else.  Well, yes, it resembles a body itching, a dog scratching behind its ear, its tail slapping rhythmically against the floor.  And that's it precisely, she thinks. I'm having a scratch, it'll soon be over, I'm trying to rid myself of a dreadful itch.

Officially, more than I ever wanted to know about anyone's divorce.  And yet it was refreshing to find someone willing to be this honest about how wrong it all went, foreskin and all
- November 16, 2019 No comments: Links to this post 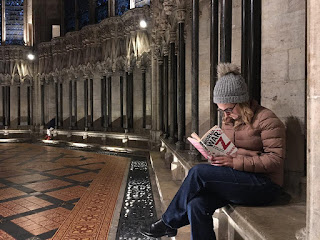 This guy has spent a LOT of time thinking about zombies.  He reminds me of someone who has set themselves the task of making an entire cookbook using, say, guavas.  It is guavas stewed, guavas fried, guavas fricassed, but instead of guavas, zombies.

I chose to read this book because of its amazing sub-title: AN ORAL HISTORY OF THE ZOMBIE WAR.  Let's face it that is sweet as hell and I wish I had thought of it.  Boldly, this book has no central character or continuous plot.  It presents a series of imagined interviews with people all over the world and different stages of the aforementioned zombie war.

I enjoyed his idea that one reason for the spread of the zombie virus was the large scale organ transplant tourism industry in China.  I was horrified to find that this is quite true: China has a thriving industry, and very short wait times, because China is removing organs from prisoners involuntarily (see here).  I can't believe it, but apparently it is true.  I can't quite think what to do with this information.  I guess I will start to take leaflets from the Falun Gong protestors outside the British Museum, for one thing, pathetically small though it is.

This view, of how societal issues today could let the zombies in was a theme throughout: there were false cures, and fake news, and unexpected nuclear wars.  Eventually humanity is saved when South Africa develops a plan to save only some people, leaving the rest as 'bait'.  This works, and is adopted globally, but is not pretty.  Horrifyingly there is much about how the zombies don't even die in water, so those who escape in submarines often surface to find themselves covered in the living dead.

So all in all an uplifting read, reminding you that if nothing else, at least you're alive.
- November 14, 2019 No comments: Links to this post 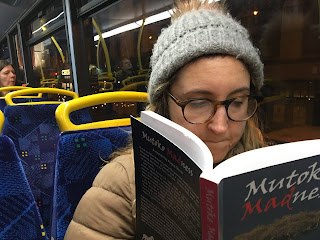 I don't comment on books by authors I know, so this one is just for the record.
- November 03, 2019 No comments: Links to this post