THE GODMOTHER by Hannelore Cayre 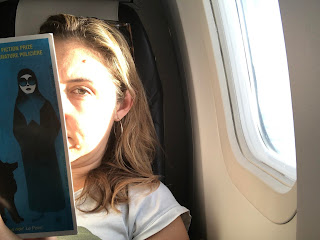 MONEY IS EVERYTHING is the title of the first chapter of this book, and from this we already know we will enjoy it.  It tells the story of an immigrant woman in Paris who figures out how to briefly become a drug lord/lady.

As with so many things in life, it all begins with her mother.  Her mother is a Jewish refugee from Austria who has dementia and is fixated on her old dog:

Schnookie was the dog who had drowned in ’38 when she and her family were crossing the Danube in a dinghy to escape the Germans.  The fox-terrier had panicked and leaped overboard, to be swept away by the current before the eyes of my powerless mother.   It’s the only time in my life I cried, she would add, in a quavering voice to whomever was listening at the time.  Needless to say, I would feel like killing her whenever she put on this display.

This hilarious last line gives you a good sense of the narrator we have.  Here she is again on her mother:

Amidst this defeated humanity, I would find my mother strapped into some sort of a capsule, her blind, staring eyes like saucers, fixed on the ceiling, waiting for the heavens to open like the doors of a store on the first day of the sales.

And on the other nursing home visitors, who similarly are struggling under the costs:

There we all were, part of that great, middle-class mass being strangled by its elderly. It was reassuring.

It is these costs that driver her look to a life of crime.  She leverages her low paid job as an Arabic translator to insert herself into the drug trade, helped  by one of her mother’s carers.  She is gloriously successful.  I wish we could have left it at that, but instead we had to have the part where her policeman boyfriend figures out what she is doing, and does not turn her in, but does dump her.  It really struck me: western cultural products can’t stand to have criminal succeed without consequences.

It’s sort of sweet – I think it is the tradition of the morality tale that we can’t quite shake off.  Or that we don’t want to shake off.  Truth is that mostly people do get away with it.  (Not that I am always going on about dictators, but let's face it they are the best example.  For every Muammar Gaddafi dying in a drainpipe there are ten Idi Amins who get to go out in deluxe Saudi hospital)