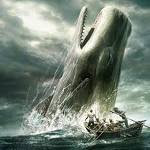 Minus ten points if you don't know why a literature blog would be called white whale. Time to brush up on that vital life skill, 19th century American fiction!

Herman Melville's MOBY DICK is a fabulously strange novel, and will strengthen your dinner party game if you read it.

Besides, poor Melville had a rough life, his later works attracting headlines such as HERMAN MELVILLE CRAZY and eventually he died in obscurity, his talent unrecognised. Makes me feel better about my own trajectory.