MEMOIRS OF AN INFANTRY OFFICER by Siegfried Sassoon 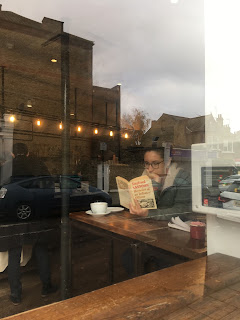 Regular readers may recall my reading of MEMOIRS OF A FOX HUNTING MAN, which was - astonishingly - about fox hunting.  You would have thought I would be well prepared for the second book in the trilogy, MEMOIRS OF AN INFANTRY OFFICER, to be about the Infantry, but I am not sure anyone can really be prepared for what Sassoon went through.  Here is a representative sample of his experience, as an officer in the first World War:

Shell-twisted and dismembered, the Germans maintained the violent attitudes in which they had died. The British had mostly been killed by bullets or bombs, so they looked more resigned. But I on remember a pair of hands (nationality unknown) which protruded from die soaked ashen soil like the roots of a tree turned upside down; one hand seemed to be pointing at the sky with an accusing gesture. Each time I passed that place the protest of those fingers became more expressive of an appeal to God in defiance of those who made the War.  Who made the War? I laughed hysterically as the thought passed through my mud-stained mind. But I only laughed mentally, for my box of Stokes-gun ammunition left me no breath to spare for an angry guffaw. . . . . Such sights must be taken for granted, I thought, as I gasped and slithered and stumbled with my disconsolate crew. Floating on the surface of the flooded trench was the mask of a human face which had detached itself from the skull.

I for sure was not prepared for this, and neither was Sassoon.  Particularly horrible is the periods when his regiment knows they must 'go over the top' at a certain time or date.    The majority of them know they will not survive it, and the waiting is almost more terrible to read about than the fighting itself.

Sassoon is great at quickly describing a person, and it is unnerving how often he brings someone to life, only immediately to casually kill him (they did not survive to the Autumn . . I heard he died two weeks later . . etc).  It especially awful how many of them are just eighteen or nineteen.  He has huge admiration for the courage of his comrades, and his previous ideas as to class crumble quickly.

As we entered it I noticed an English soldier lying by the road with a horribly smashed head; soon such sights would be too frequent to attract attention, but this first one was perceptibly unpleasant. At the risk of being thought squeamish or even unsoldierly, I still maintain that an ordinary human being has a right to be momentarily horrified by a mangled body seen on an afternoon walk, although people with sound common sense can always refute me by saying that life is full of gruesome sights and violent catastrophes. But I am no believer in wild denunciations of the War; I am merely describing my own experiences of it; and in 1917 I was only beginning to learn that life, for the majority of the population, is an unlovely struggle against unfair odds, culminating in a cheap funeral. Anyhow the man with his head bashed in had achieved theoretical glory by dying for his country in the Battle of Arras, and we who marched past him had an excellent chance of following his example.

We leave these MEMOIRS just when Sassoon is planning to publicly denounce the war in the newspaper, probably leading to his courtmartial.  He's furious at Generals who don't understand what they are asking of troops, at civilians, at churches, at anyone who speaks badly of the Infantry - even German infantry. I'm definitely going to read the next book; he looks like he is going to survive the war - the question for me is how he manages to survive the peace.
- February 11, 2018