DAISY JONES AND THE SIX by Taylor Jenkins Reid 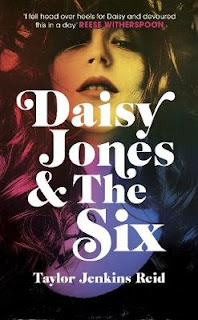 This book is curiously more-ish.  It’s the story of a band’s ascent to stardom and then immediate implosion, mixed up with a couple of love stories.

The author presents the story as a series of snippets from documentary interviews with the band.  I found this a little gimmicky.  I also didn’t think it was used as well as it could have been.  Everyone’s story was inconsistent, but not nearly as interestingly inconsistent as it would actually be in real life, when we all remember the version of the story that makes us look either best or worst (depending on our specific hang-ups).

That said, as I said: it’s more-ish.  Like a packet of Java Cakes, I kept on going when I should have stopped, for example to go to sleep in a hotel room in Madrid so I could wake up early to work.  It made me realize how fabulously elemental the classic rock’n’roll story is.  Your classic rock star story, which this is, is a mash up of some the great achetypes.  It’s almost always an underdog story; it involves a steep unexpected rise, and a satisfying fall; usually it involves a comforting homily of the dangers on getting what you wish for (which is very nice for the rest of us, who haven’t managed to be rock stars.  Makes us feel like we’re not missing out, though of course we are.  I’m sure large quantities of transactional sex must be really fun for at least the first decade).  Add to this that this novel also had a couple of interesting love stories, and no wonder Reese Witherspoon has optioned it for TV.

One of the interesting love stories was about a woman who decides to work through infidelity with her husband.  I can’t think when I last read a contemporary American novel in which any one was so sensible.  It’s always a load of nonsense about once-a-cheater-always-a-cheater as if life was an after-school special you could manage with rules, instead of a chaotic mess. So I liked that too.

In summary, a great book for a long flight.