APPOINTMENT IN SAMARRA by John O’Hara 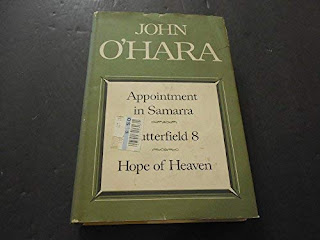 I read this in my most absolute favourite format: an out of circulation library book.  Even better, it had a torn dust jacket.  I just love that dirty smell and the feeling that a book has passed through many hands.

This is a story about a man who destroys his life over the course of a few days. It’s not totally clear why, but as a starter for ten I’d say he’s an alcoholic with untreated depression.  He offends a major customer, cheats on his wife, and etc.  In a way it looked kind of amazing.  He absolutely burns his bourgeois life to the ground.

What I found especially interesting was how explicit it was, for a book written in 1934.  Try this, the opening paragraph:


OUR STORY opens in the mind of Luther L. (L for LeRoy) Fliegler, who is lying in his bed, not thinking of anything, but just aware of sounds, conscious of his own breathing, and sensitive to his own heartbeats. Lying beside him is his wife, lying on her right side and enjoying her sleep. She has earned her sleep, for it is Christmas morning, strictly speaking, and all the day before she has worked like a dog, cleaning the turkey and baking things, and, until a few hours ago, trimming the tree. The awful proximity of his heartbeats makes Luther Fliegler begin to want his wife a little, but Irma can say no when she is tired. It is too much trouble, she says when she is tired, and she won’t take any chances. Three children is enough; three children in ten years. So Luther Fliegler does not reach out for her. It is Christmas morning, and he will do her the favor of letting her enjoy her sleep; a favor which she will never know he did for her. And it is a favor, all right, because Irma likes Christmas too, and on this one morning she might not mind the trouble, might be willing to take a chance. Luther Fliegler more actively stifled the little temptation and thought the hell with it, and then turned and put his hands around his wife’s waist and caressed the little rubber tire of flesh across her diaphragm. She began to stir and then she opened her eyes and said: “My God, Lute, what are you doing?” “Merry Christmas,” he said.

This is more middle aged sex than I was ready for.  It also gives you a good sense of the energy of the writing. There are a huge range of characters who the protagonist annoys or upsets, and they are all drawn with vigour. I'm surprised neither this author nor this book are not more famous.