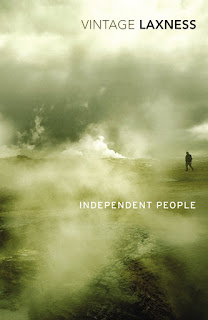 Guys, I’m now fully informed about the life of subsistence sheep farmers in Iceland in the early twentieth century, and let me tell you it is not pretty.   I’m so fully informed I am hoping Icelandic shepherding will somehow come up in dinner party conversation so I can impress others with my incredibly niche knowledge.  This seems unlikely.

This book is a good corrective to any idea we might have in the modern day about how ‘busy’ and ‘stressed’ we are.  Truly stressed people make their children work sixteen hour days in the rain, because they need to or else they will starve.  Also, they don’t think rain is a big deal.  Here’s the main character:

And if Bjartur heard them complaining about the damp he would reply that it was pretty miserable wretches that minded at all whether they were wet or dry.  He could not understand why such people had been born.  “It’s nothing but damned eccentricity to want to be dry,” he would say.  “I’ve been wet more than half my life and never been a whit the worse for it.”

You would think he must be joking, but no.  When looking for sheep on the mountains he often sleeps out in a cave even when there is snow on the ground.  All you have to do, I learn, is wake up four times a night to turn the boulder you are sleeping on over sixteen times.  Then you are quite warm, and even if not you are so tired you don’t notice it.  Handy tips, if ever my life goes so horrifyingly wrong I have to be an Icelandic sheep farmer.  Then I can look forward to rye bread with a ‘lump of tallow and cod liver’ for breakfast, and salted fish for 100% of other meals, though in spring that should read ‘meal’ as you only get one of those a day.  Brjartur’s elderly grandmother in fact does not like fresh food, arguing it makes her ill.

The main message of this book, other than to make you very, very, very grateful for your own circumstances is that one life is not long enough for the poor man to ever get out from under.  It’s a bleak, but probably true, opinion, and the central tragedy of the story is Bjartur’s effort to be ‘independent’.

He works 18 years for someone else to afford a small piece of land, and then works himself and his sickly family astoundingly hard, to build a flock ("Whatever happens you can always comfort yourself with the thought that the sheep are in the home pastures," he helpfully comments when someone dies).  That flock is then occasionally wiped out, by worms, or storms, or on one weird occasion by ghosts (?).

They have one piece of luck: the First World War!  It drives up prices for Icelandic lamb.

“Oh let them squabble, damn them,” said Bjartur.  “I only hope they keep it up as long as they can. . . . I only hope they go on blasting one another’s brains out as long as other folk can get some good out of it.  There ought to be plenty of people abroad.  And no one misses them


Poor old Brjartur does well off this, but them overreaches to build a house, which plunges him into debt again.  This does not deter him. He is a battleaxe of a man.  When his only remaining son plans to emigrate to America, leaving no one to take over the shabby field that is his life’s work

He made no further attempt to talk his son over; it is a mark of weakness to try to talk anyone over.  An independent man thinks only of himself and lets others do as they please.  He himself had never allowed anyone to talk him over.

This gives you a flavour.  It’s a sort of sad novel, but also quite funny.  Here is a local middleclass landowner

Now the Bailiff’s nature was such that had he been accused of theft or even of murder he would have preserved an unruffled exterior and have seemed, indeed, to be quite gratified.  But with one crime he would not have his name connected: if anyone insinuated that he was making money the ice was broken and his tongue was loosened, such a slander was more than he could stand.

You also learn the fate of Bjartur’s whole family, who do all sorts, get pregnant out of wedlock, die in snowstorms, etc.  There’s much wisdom to it, often of the melancholy kind:

But the first days are always the worst, and there is much comfort in the thought that time effaces everything, crime and sorrow no less than love.

Poor old Bartjur.  He loses everything anyway, not in the end because of the worms, or the storms, or even the ghosts, but because of the debts.  The tagline of the novel might as well be: You can’t fight city hall.